May in the Woods 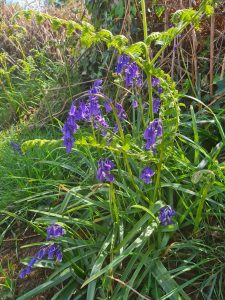 May is my favourite month of the year, but this year as it has been so warm early in April some of the May flowers are already over. The weather has been amazing this spring but as we have been in lockdown here in the UK the opportunity to visit outside my local area has been restricted. The upside is that I am very familiar with my local area of Clevedon and have loved watching the seasons change.

Bluebells are almost over and have put on a good show. I have been pulling them out of the garden again as they appear in the most surprising places. If you are lucky enough to have our native bluebell you can tell it from the more common and invasive Spanish variety as it is more delicate, and its bells are all on the same side making it hang over. The Spanish is more upright and its flowers larger. Most of the bluebells around here are the native ones but, in some areas, the invasive Spanish variety are trying to take over. 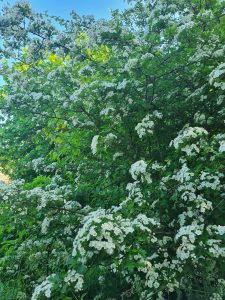 The Hawthorn is in flower, it is also called May blossom as it always flowers in this month. You can eat the young leaves and flowers – it is known as ‘bread and cheese’. Later on, in the autumn, the berries will be food for the birds and can be made into a ketchup if you want to use them too. The elder blossom starting to open but this is more of a late May to June flower.

If you go into any woodland you will see that the delicate plants of early spring are long gone and in there place is cow parsley, bluebells, red campion and stitchwort The bracken is starting to unfurl and by next month it will have covered the woodland floor along with brambles and nettles and wont look anywhere as pretty. 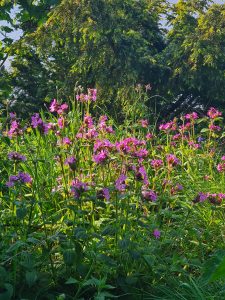 Strolling along the cliffs by the sea the thrift is in flower and as is the valerian. I spotted some deep red flowers instead of the usual pink. It is lovely in the hedgerows and by the cliffs but not so great in the garden growing in walls.

The sea beet, also known as wild spinach, is growing among the shingles and the leaves can b

oiled then eaten. It belongs to the same family as sugar beet and swiss chard. I also spotted some wild strawberries, but do not expect the fruits will last long. One plant you can’t miss is the tree mallow, it grows in the south west and can get to 3 metres high. It has incredibly soft leaves so if you are caught short on your walk it would make a handy toilet roll substitute! 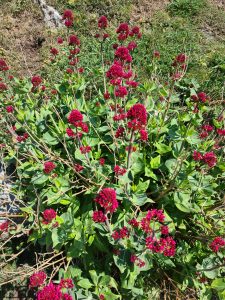 The swifts are here again, swooping after insects on the wing. Swifts have only very tiny legs as they live most of their life on the wing. Only leaving the air to bring up their chicks. You can’t mistake them for swallows or house martins as they are nearly all wing and give the most amazing areal display. I love just listening to the birds. If you get the chance, stand in a woodland or anywhere there are birds singing, and close your eyes. Just stand and listen. It is a wonderful experience, so long as you can get away from other people and traffic.